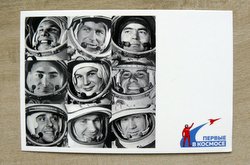 On March 18th a postcard came from Russia. The postcard shows nine portraits of Russian cosmonauts. Yuri Gagarin is one of them. He was the first person in space. On April 12, 1961, he once circled the earth. On March 27, 1968, he died on a training flight in a Russian fighter plane.
There wasn’t much space on the text side of the postcard. The portraits on the front were described. It was described name, accomplishments, when he lived and so on.
She just wrote a small line, which is OK.
There were 3 standard Russian postage stamps on the postcard. 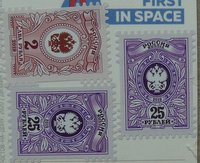